The Yoshi figure is a character figure available in the first wave of amiibo figures. It was released on the November 21, 2014 in North America.

Yoshi is a green dinosaur-like creature with a big nose with two nostrils and orange spikes on his back. His figure is identical to his official artwork. He wears his usual brown and yellow shoes and his red saddle. His head is turned to the right side. He appears to be walking, with his left leg in front in front of the other and his arms on the side of his body.

Yoshis come in all sorts of colors, but Mario’s close buddy debuted in green. Kind-hearted, naturally protective of others, and perpetually hungry, Yoshi is always up for adventure…especially if there are snacks involved. Yoshis can flutter their legs to jump incredibly high. They also have extremely long tongues that they use to snare fruit and even enemies—anything they swallow gets turned into throwable eggs. 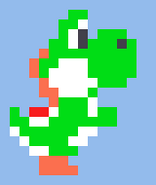 Super Mario Maker
Add a photo to this gallery
Retrieved from "https://amiibo.fandom.com/wiki/Yoshi_(Super_Smash_Bros.)?oldid=19533"
Community content is available under CC-BY-SA unless otherwise noted.