Yoshi's Woolly World (ヨッシーウールワールド Yosshī Ūru Wārudo, Yoshi Wool World) is a platform game on Wii U developed by Good-Feel and published by Nintendo. It is the 13th installment in the Yoshi series and the first Yoshi game on a home console since Yoshi's Story in 1997. This game's graphics are stylized so that everything looks like it's made of yarn, similar to the Wii game Kirby's Epic Yarn also developed by Good-Feel.

In September 2016, a remake called Poochy & Yoshi's Woolly World was annouced for Nintendo 3DS. It was released in January in Japan.

When the green, pink, light blue and Mega Yoshi amiibo figures are scanned on the gamepad, it will unlock Double Yoshi, which can join you in gameplay even if you're not playing multiplayer mode.

The game has two types of features involving amiibo.

When the player scan any of the yarn Yoshi amiibo in the gamepad, the Double Yarn Yoshi mode will start. In this mode, the player controls the two characters at the same time. One Yoshi can throw the other like a yarn ball, similar to Multiplayer Mode. This helps collecting hidden items in the stages. 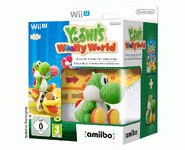 Bundle released in Europe, containing the game and the Green Yarn Yoshi amiibo

Donkey Kong Pattern in-game
Add a photo to this gallery

Retrieved from "https://amiibo.fandom.com/wiki/Yoshi%27s_Woolly_World?oldid=21189"
Community content is available under CC-BY-SA unless otherwise noted.