The Toad figure is a character figure available in Wave 1 of amiibo Super Mario series figures. He is the only figure from Wave 1 that doesn't have a Smash Bros. version.

He wears a blue vest, large brown shoes and a large diaper-like piece of clothing for pants. His appearance often depicts him to looking like a small human child with his miniature size and recognizable human like features, and a white head with red polka dots.

Toads are the servants at Princess Peach's Castle in the Mushroom Kingdom. Toads give off a strong sense of peace, but are no strangers to adventure and kart racing. Most feature white heads with red polka dots, but there are other types as well, including Captain Toad, self-proclaimed leader of the Toad Brigade.

The Pixel Toad item will be hidden in a stage in Captain Toad: Treasure Tracker, when Toad amiibo is used 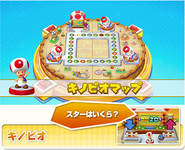 The back of the box

Using the Toad amiibo in Super Smash Bros. for Nintendo Wii U (which is impossible)

Community content is available under CC-BY-SA unless otherwise noted.
Advertisement