Two versions of the game were released, one for Nintendo 3DS and the other for Wii U. The Wii U version is presented in high-definition visuals, while the Nintendo 3DS version features characters with black outlines, which can be toggled on and off.

The Wii U version is compatible with the amiibo platform. amiibo is also compatible with 3DS devices via the Nintendo 3DS NFC Reader/Writer, which is sold separately or in a bundle with Animal Crossing: Happy Home Designer. However, on New 3DS and New 2DS systems the NFC Reader/Writer isn't necessary, as a NFC chip is built in the systems below the touchscreen.

In these games, amiibo are used as a sort of training partner. Your figure keeps your stats in its memory and learns the way you play so it can better counteract your strategies. You can also adjust its stats and give it special equipment or moves. It can also be used against a human opponent in the middle of a match.

The amiibo menu's features in the Wii U version. 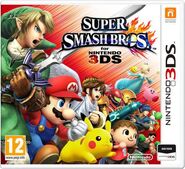 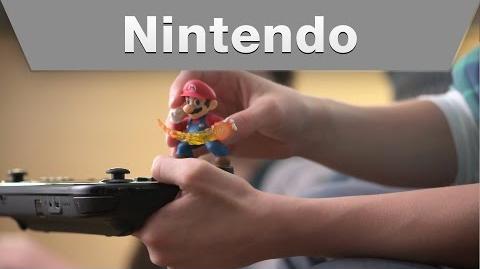 Nintendo - amiibo with Super Smash Bros. for Wii U
The Trailer.
Add a photo to this gallery

Retrieved from "https://amiibo.fandom.com/wiki/Super_Smash_Bros._for_Nintendo_3DS_/_Wii_U?oldid=20583"
Community content is available under CC-BY-SA unless otherwise noted.