Mario
Super Mario Odyssey is the latest entry in the Super Mario series and takes a return to a sandbox approach like Super Mario 64 to explore levels inspired by real world locations. It launched on the Nintendo Switch on Oct. 27, 2017.

The wedding amiibo were announced at E3 2017:

Talk to Uncle amiibo when he is present in a level to have up to 3 amiibo search for Power Moon locations. Any amiibo will work with the Power Moon hint search, though Uncle amiibo doesn't know the names of some amiibo, he just refers to those as "lovely", "charming" and "mysterious" amiibo. Uncle amiibo can also unlock outfits for Mario with the appropriate amiibo.

To scan an amiibo, hold ▶⃝ on the - JoyCon or left on the d-pad to bring up the amiibo prompt, then tap to scan.

Field use of any amiibo without a specific role will simply give Mario either a few coins or a Heart. 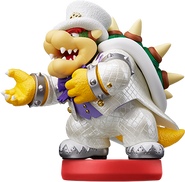 Wedding set 3-pack
Add a photo to this gallery

Retrieved from "https://amiibo.fandom.com/wiki/Super_Mario_Odyssey?oldid=19726"
Community content is available under CC-BY-SA unless otherwise noted.