The game was first announced at E3 2014 under the name Mario Maker. The game was conceived as a tool by Nintendo's internal development team, to be used within the company; the game was demonstrated under the new name, on June 14, 2015, during the final round of the Nintendo World Championships 2015 event preceding E3. The game was later released on the 3DS on December 2, 2016, as well as a sequel on June 28, 2019.

Players can scan amiibo to add in a Mystery Mushroom, which transforms Mario into other Nintendo characters based on the figure scanned, or Big Mushrooms, which can be added with Pixel Mario amiibo.

The 3DS version is not compatible with amiibo.

The music and sound effects of the game also change depending on the scanned figures.

The following figures can be used to unlock Big Mushrooms:

The following figures can be used to unlock Mystery Mushrooms:

Other amiibo figures include:

Scanning an amiibo allows the player to hide a Mystery Mushroom to transform Mario into other characters.

8-bit Link "costume" for Mario in the game

8-bit Wii fit Trainer "costume" for Mario in the game

8-bit Isabelle "costume" for Mario in the game

8-bit Marth "costume" for Mario in the game 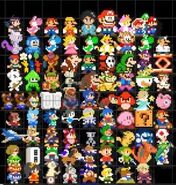 Wii U Box art
Add a photo to this gallery

Retrieved from "https://amiibo.fandom.com/wiki/Super_Mario_Maker?oldid=21384"
Community content is available under CC-BY-SA unless otherwise noted.