Splatoon is a team-based third-person shooter which is playable by up to eight players in online 4-vs-4 matches, although the game also features a single-player campaign. Players control characters called Inklings, who have the ability to change between human and squid forms. The Inklings can shoot colored ink across the game environment, with the player's goal being to cover the most territory in their team's color before the match ends.

In the game Amiibo unlock bonus missions for the single player campaign. These missions offer exclusive rewards such as new accessories or money. 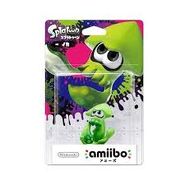 Pack with the three figures.
Add a photo to this gallery

Retrieved from "https://amiibo.fandom.com/wiki/Splatoon?oldid=19680"
Community content is available under CC-BY-SA unless otherwise noted.