Shovel Knight is a platforming game made by Yacht Club Games. Shovel Knight is being directed by former WayForward Technologies member Sean Velasco, and includes music composed by Jake "Virt" Kaufman and Manami Matsumae. Various expansions are being made for the game. It is the first game compatible with the Shovel Knight amiibo, and the first independently developed game to use amiibo functionality.

After scanning the Shovel Knight amiibo into the Shovel of Hope campaign, players can level up by defeating enemies and finding treasure earn new relics, abilities, and powers, customize the look of their Shovel Knight with various cosmetic options, and unlock two player co-op mode in the Wii U version. In co-op mode, both players play as two different Shovel Knights. Players can use their custom amiibo seamlessly between all Nintendo consoles.

Any of the campaigns also allow users to unlock a cosmetic "Fairy of Shovelry" character that follows you around. He can be unlocked by talking to Madame Meeber in each of the hub/town areas. 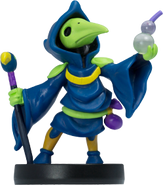 King Knight
Add a photo to this gallery

Retrieved from "https://amiibo.fandom.com/wiki/Shovel_Knight:_Treasure_Trove?oldid=19718"
Community content is available under CC-BY-SA unless otherwise noted.