Rosalina is a character figure available in the 3rd wave of amiibo figures for Super Smash Bros. for Nintendo 3DS and Wii U. It was released on February 1, 2015 in North America and is exclusive to Target stores in the United States.

Rosalina is a tall woman, bearing a resemblance to Peach. However, Rosalina's skin is paler, her eyes are a lighter shade of blue, and her hair is a lighter blond than Peach's. She wears purple nail polish and has a large bang which obscures her right eye. Her brooch, crown, and earrings are star-shaped. The brooch and crown are silver, as are her high heels, while the earrings are yellow. Rosalina also wears a number of jewels, including a yellow jewel inside the brooch and crown jewels that are pink and turquoise. Her gown cuts off at the top of her chest, where a powder-blue flap loops around, and has long sleeves with wide openings at the bottom, which are topped with powder-blue frills. Rosalina also holds a silver wand with a golden star at the top.

Rosalina travels through space in a starship called the Comet Observatory. Motherly and protective of the many Lumas that she travels with, she guards the cosmos against any and all threats. Wielding a Star Wand and her signature blue dress, Rosalina always seems cool even in the face of danger. 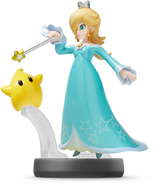 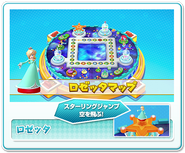 In Mario Party 10, the Rosalina amiibo allows to use this board in the "amiibo Party" mode