Peach amiibo is a character figure available in the first wave of amiibo figures. It was released on November 21st, 2014 in North America.

Peach is a princess with long blond hair and blue eyes. Her figurine is identical to her official artwork. She wears her usual outfit: a pink frilly dress, a gold crown with jewels, blue earrings, white long gloves and dark pink high heeled shoes. She has her legs crossed and has an hand on her side and another one in the air. She appears to be floating since she doesn't touch the stand and is instead supported by a clear rod connected under her dress.

Princess Peach presides over the Mushroom Kingdom from her huge castle. Though she’s often the target of Bowser’s kidnapping schemes, Princess Peach is far from a simple damsel in distress. She’s a natural at tennis and golf, a ferocious driver, and can more than hold her own at adventuring and battling. 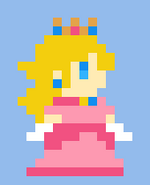 Super Mario Maker
Add a photo to this gallery
Retrieved from "https://amiibo.fandom.com/wiki/Peach_(Super_Smash_Bros.)?oldid=19493"
Community content is available under CC-BY-SA unless otherwise noted.