GameStop (US)
EB Games (CAN)

Mr. Game & Watch is an unlockable character in Super Smash Bros. for Nintendo 3DS and Wii U. This figure was revealed on June 14, 2015 and was released on September 25, 2015. In North America, it was released in a Retro 3-Pack with R.O.B and Duck Hunt. It is exclusive to GameStop (US) and EB Games (CAN).

Mr. Game & Watch has a humanoid appearance, he is monochrome and two-dimensional due to the LCD display of the Game & Watch, his console of origin. He also has a big nose and mouth. He also has no fingers on his hands.

Proof that Mr. Game & Watch would come to the amiibo lineup 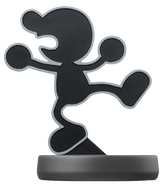 Out of the box
Add a photo to this gallery

Retrieved from "https://amiibo.fandom.com/wiki/Mr._Game_%26_Watch?oldid=21116"
Community content is available under CC-BY-SA unless otherwise noted.