The Mii Swordfighter figure is a character figure available in the sixth wave of amiibo figures. It was released in November of 2015 in North America (Nov 1st in the US, and Nov 20th in Canada), as part of a 3-pack which is exclusive to Toys 'R' Us in the US.

The Mii Swordfighter appears like he does in the game, instead of some other Mii. He is wearing the standard swordfighting costume.

Mii Fighters are playable characters in Super Smash Bros. for Wii U and Nintendo 3DS. They are based on a player’s Mii™ character—so anyone can join in—and you can outfit them with fun costumes. There are three different types (Brawler, Swordfighter, and Swordfighter), and each one brings a different fighting style to the battle! 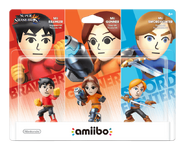 Mii 3-Pack
Add a photo to this gallery

Retrieved from "https://amiibo.fandom.com/wiki/Mii_Swordfighter?oldid=20367"
Community content is available under CC-BY-SA unless otherwise noted.