Mega Yarn Yoshi is a giant Amiibo that was released at Wave 2 of the Yoshi's Woolly World series.

Made from actual yarn, Yoshi™ has never been more adorable! Kind-hearted, naturally protective of others, and perpetually hungry, Yoshi™ is always up for adventure…there are so many mysteries to explore and new things to find! Yoshis can flutter their legs to jump incredibly high and can use their long tongue to snare enemies or other handy things. 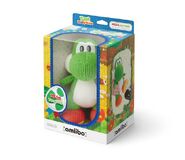 Mega Yarn Yoshi's package.
Add a photo to this gallery

Retrieved from "https://amiibo.fandom.com/wiki/Mega_Yarn_Yoshi?oldid=19534"
Community content is available under CC-BY-SA unless otherwise noted.