The Luigi figure is a character figure available in the second wave of amiibo figures. It was released in December 2014.

Luigi is a tall man with a bushy mustache and brown hair. He wears a green t-shirt with blue overalls. He also has brown shoes, white gloves and a cap with an L on it. On his figure, he is leaning on his feet with both his arms on the side of his body.

Luigi is shy, quiet and often overshadowed by his sibling, but he's actually quite talented. His jumping ability surpasses Mario's, and his all-around skills let him overcome any problem. He's a bit cowardly and really afraid of ghosts. Even so, in the Luigi's Mansion games, he was charged with cleaning up poltergeist problems. 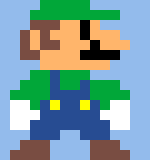 Super Mario Maker
Add a photo to this gallery
Retrieved from "https://amiibo.fandom.com/wiki/Luigi_(Super_Smash_Bros.)?oldid=19495"
Community content is available under CC-BY-SA unless otherwise noted.