The Kirby figure is a character figure available in the first wave of amiibo figures. It was released on November 21, 2014 in North America.

Super Smash Bros. for Nintendo 3DS and Wii U

When scanned into Super Smash Bros for Nintendo 3DS and Wii U, this figure calls a FP (figure player) to fight against, or to fight with. One can level this figure player up from one to fifty, and teach it how to fight. It inherits the skills that one teaches it. The figure can inherit both good and bad habits. Figure players pick up custom equipment, moves and trophies during matches, moreso than computer players.

When scanned into Mario Kart 8, this figure unlocks a Kirby-themed Racing Suit for one's Mii. This outfit can be used in all single player modes, as well as the online mode. Once scanned, this figures effects are permanent.

When scanned into Hyrule Warriors, this figure unlocks various items, weapons and also gives the user a random amount of rupees. This figure can only be scanned in once per day.

When scanned into Hyrule Warriors Legends, this figure unlocks various items, weapons and also gives the user a random amount of rupees. This figure can only be scanned in once per day.

Kirby and the Rainbow Curse

When scanned into Kirby and the Rainbow Curse, this figure grants the user with the 'Star' ability which allows Kirby to charge through obstacles. This figure can only be used once a day on one level.

When scanned into Kirby: Planet Robobot, this figure gives Kirby the Smash Bros. ability, which let's him use his moveset from the Super Smash Bros. series. A maximum of 10 figures can be scanned per day.

When scanned into Mario Party 10, this figure allows the player to scratch an in-game scratch card which can reward the user with points, the amount depending on your luck. These points can be used to unlock various in-game rewards.

When scanned into One Piece: Super Grand Battle! X, this figure unlocks a new costume for Tony Tony Chopper. Once scanned, this figures effects are permanent.

When scanned into Captain Toad: Treasure Tracker, this figure rewards the user with a 1-Up Mushroom, which in turn grants them with an extra life.

Kirby is a pink round ball with two small arms and red feet. He has large blue eyes with dark pink ovals under them. He is sitting on his stand with his arms behind him.

Round, pink and surprisingly powerful, Kirby is one of the most iconic heroes in video game history. A denizen of the peaceful planet Pop Star, Kirby became a citizen of Dream Land after defeating King Dedede. He can inhale things with his big mouth, either copying their abilities or spitting them out again. 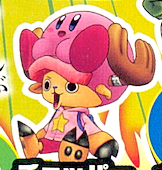 Kirby and the Rainbow Curse

Super Mario Maker
Add a photo to this gallery
Retrieved from "https://amiibo.fandom.com/wiki/Kirby_(Super_Smash_Bros.)?oldid=20689"
Community content is available under CC-BY-SA unless otherwise noted.