Kirby: Planet Robobot (Japanese:カービィプラネットロボボット, Kābyipuranettorobobotto) (星のカービィ ロボボプラネット Hoshi no Kābi: Robobo Puranetto, Kirby of the Stars: Robobo Planet), is a game of the Kirby franchise, released for Nintendo 3DS, along with the Kirby amiibo line. The game has a similar gameplay style as of Kirby: Triple Deluxe, previously released for the same console, but now includes a new gameplay feature that consists of controlling giant robots, know as Robobots.

Each amiibo scanned gives Kirby new copy abilities based on the figure. For example, if the player scan a Mario figure, it will unlock the Fire ability to use for the moment.

The figures from the Kirby amiibo line unlocks new versions of certain copy abilities with a new look based on the character of the figure.

The Kirby figure of his own line unlocks the U.F.O. ability, that only can be obtained by the figure. 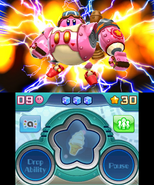 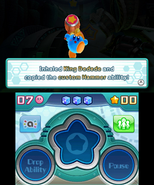 Kirby gaining the Hammer ability after scanning the King Dedede figure.
Add a photo to this gallery
Retrieved from "https://amiibo.fandom.com/wiki/Kirby:_Planet_Robobot?oldid=21128"
Community content is available under CC-BY-SA unless otherwise noted.