K.K. Slider is a wandering musician—who occasionally moonlights as DJ K.K.—from the Animal Crossing series. In Animal Crossing: New Leaf, you can request your favorite hit during his live concerts held every Saturday, and he'll give you a recording of the song to take home as a memento. The mayor's secretary, Isabelle, apparently has a big crush on him. Who could blame her?

Unlocks a DJ K.K. spirit for the World of Light and Spirit game modes. DJ K.K. is a 2 star Primary Spirit with three slots for Support spirits, and a base power level of 1,357. DJ K.K. is a grey colored spirit- granting him no particular advantage or disadvantage against any other spirit color types. 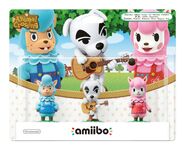 3-pack with Cyrus and Reese.
Add a photo to this gallery

Retrieved from "https://amiibo.fandom.com/wiki/K.K._Slider?oldid=20244"
Community content is available under CC-BY-SA unless otherwise noted.