Isabelle is the mayor's highly capable secretary from the Animal Crossing: New Leaf game. She can be forgetful sometimes, but you can always count on her for information about the town, and she's happy to cheer you on in all your mayor-ly duties. She also has a twin brother named Digby. 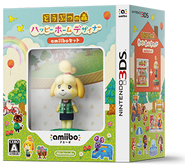 Retrieved from "https://amiibo.fandom.com/wiki/Isabelle_(Animal_Crossing:_amiibo_Festival)?oldid=21062"
Community content is available under CC-BY-SA unless otherwise noted.