Star Fox (1993)
The Fox figure is a character figure available in the first wave of amiibo figures. It was released on November 21st, 2014 in North America.

Fox is a brown fox with white accents. He sports a white jacket with a green shirt and a red scarf under it. He also wears green pants with red and black boots and gloves. On his waist, he wears a shield and he has a visor on his right eye and a metal helmet behind his head. His pose is identical to the one from his official artwork, where he jumps in the air with both his legs parallel to each other. His left arm is raised in the air an his right one is in front of him. His left leg is held by a blue support.

Fox is the leader of the commando unit for hire known as Star Fox. He uses both the team's mother ship, the Great Fox, and his personal Arwing fighter to challenge the evil scientist Andross. His piloting skills are top notch, but he can also bring speed and fast attacks to the battle through hand-to-hand combat. 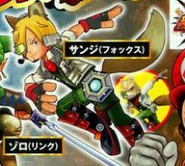 Fox costume in One Piece: Super Grand Battle! X.
Add a photo to this gallery

Retrieved from "https://amiibo.fandom.com/wiki/Fox?oldid=18678"
Community content is available under CC-BY-SA unless otherwise noted.