Each figure unlocks a special dungeon where players can battle bosses and collect in-game items.

Players can save the current strength of Alm or Celica in the game to the corresponding amiibo figure.

During combat, players can sacrifice a portion of Alm or Celica’s health in order to summon a computer-controlled illusory hero that will act as a temporary ally for a single turn. 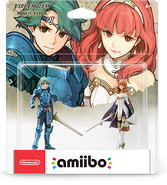 NA Alm/Celica 2-pack
Add a photo to this gallery

Retrieved from "https://amiibo.fandom.com/wiki/Fire_Emblem_Echoes:_Shadows_of_Valentia?oldid=18858"
Community content is available under CC-BY-SA unless otherwise noted.