Callie is a figure from the second wave of the Splatoon line of Amiibo figures. It was released in July 8th, 2016, both in a standalone pack and in a pack with Marie.

Callie is the cheeriest member of the pop idol duo known as the Squid Sisters in the Splatoon™ game. Along with Marie, she hosts Inkopolis News and Splatfest events, in which Inklings pick one of two sides and battle the opposing team in Turf War. These two cousins rose to fame after winning Calamari County’s first annual Youth Folk-Singing Contest, and their remarkable voices continue to rock Inkopolis! 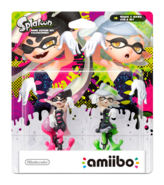 Callie in the Squid Sisters Set with Marie.
Add a photo to this gallery

Retrieved from "https://amiibo.fandom.com/wiki/Callie?oldid=20558"
Community content is available under CC-BY-SA unless otherwise noted.