The Bowser figure is a character figure available in Wave 3 of amiibo figures. Before it was revealed, however, the only confirmation we had was an appearance in the E3 2014 amiibo video. In that trailer, it was seen fighting against Sheik and a Mii Gunner. It was released in February of 2015 in North America.

Bowser is a huge, burly, green-shelled Koopa with spikes, horns, and red hair. His bushy eyebrows and mane are fittingly a bright, fiery red-orange and has bright red eyes. He sports two small horns, many spikes on his shell with brown-orange spike-rings, as well as along his tail, minus the spike-rings. He wears several spiked collars around his neck and arms. He has three claws on each of his massive padded feet, which support his impressive girth. He has three claw-tipped fingers and a thumb on each hand, and his arms are noticeably burly, indicating his vast physical strength. While his face and his shell are green, his underbelly and snout are flesh-colored, and his tail and limbs are an orange-tinged yellow.

Bowser is the king of the Koopas and Mario's eternal rival. He breathes fire, hurls hammers, and uses all sorts of weapons in hopes of taking out Mario. As his size suggests, he's immensely powerful. His plans aren’t always the best, and sometimes he even finds himself on Mario’s side.

Screenshot of his appearence in the trailer 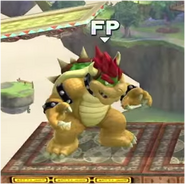 Close-up of Bowser in the trailer

The back of the box (Super Smash Bros. version)
Add a photo to this gallery
Retrieved from "https://amiibo.fandom.com/wiki/Bowser_(Super_Smash_Bros.)?oldid=19506"
Community content is available under CC-BY-SA unless otherwise noted.